I’ve never been an over achiever at ANYTHING. I always made mediocre grades, did just enough to get by. If there was a loop hole or a flaw in the system, I’m pretty much going

to take full advantage of it, if that means I don’t have to work hard. The one thing that other people thought that I was exceptional at was music. I spent a good portion of my life telling myself that’s all I would ever be good at, so I went to college for music twice, and I dropped out both times. Even though singing was something that I could do, it hit me that it’s not what I WANTED to do with my life.

One day, I was watching HGTV and I was watching how the real estate agent talked about the properties and show the couples around homes. I thought to myself “hmm I could totally do that!” So I told my husband that I was going to get my license and he supported me. I used money from my school 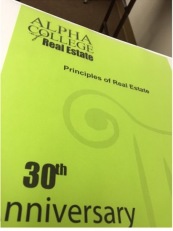 refund to pay for the classes and the books.

After three weeks of class, and two failed test attempts, and one busted knee, I had my license and I was working at my first firm. I learned so much from my first firm, but they sold real estate the old school way, and I kept going over in my mind there had to be better way. Like I stated before, if there’s an easier way to do something I’m taking it! I pretty much fell off of going to the morning calling sessions and doing my open houses every month. Then one of the brokers called and said “listen I don’t think we’re a good fit for you, you’re out!” I had officially failed at my first attempt at real estate.

I gave myself a breather, I had to figure out if I had spent all that money on something that I couldn’t do (Damn you HGTV!). So I decided to go check out this firm that claimed they were cutting edge and doing things differently than other firms. Sure enough, when the recruiter walked me through all the technology that there were using to help people find homes I was so sold! I was so sold that I talked my husband into quitting his job and coming to work for them too!

I really had to fight to get to this point of being happy in what I do. I failed but I didn’t let that stop me. I even asked the universe for an easier way for me to succeed at something I know I could be amazing at, and it was provided. So far between Mario and I we’ve closed 5 homes, working on 6 and 7. That would honestly be impossible doing business the old school way. I’m really thankful and blessed to be working at Blu Skyy Realty!

I guess the lesson of this post is don’t settle. If you are passionate about something don’t let failure or people stop you from getting what is yours. If you keep pushing, everything will work out the way you want to, and it will freak you out how perfect it will be. All things are possible with hard work and faith!